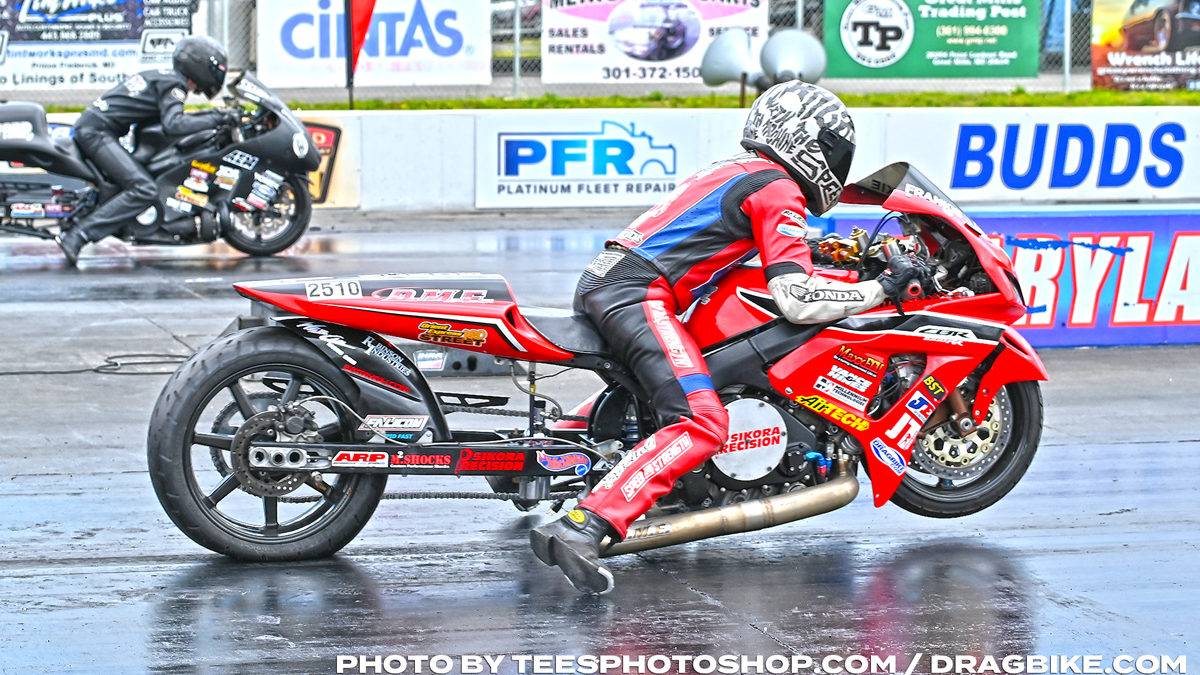 The second race of the season for Stotz Racing went off with a bang at the XDA season opener in Budds Creek, Maryland. The team headed out a day early to test, and the bike off the trailer running their typical numbers, but this time it was fighting a spinning issue right before the 3 to 4 shift causing the bike to not engage into fourth gear.

However, while fighting this issue the team was still able to beat their sixty-foot times to a class-best 1.08 sixty foot. Realizing what they had on their hands, they decided to change things around. And low and behold they solved their issue Friday evening running a 4.30 @170 to the eighth-mile, this allowed them to head confidently into qualifying on Saturday.

As everyone was called to the lanes they were surprised to find the staging lanes packed! They didn’t realize everyone was waiting to either be the first Pro Street bike in the 6.50’s or at least witness it. As everyone ahead of them went down the track, that illustrious 6.50 pass wasn’t achieved. So as we made it to the burn out box, Kent leaned over to Frankie and said this should be a low 6.60. Frankie replied back and said, “Nah, it’ll go a fifty right here. And low and behold, the Stotz Racing team was officially the first 6.50 Pro Street bike to run a 6.58 @ 204mph. But the pass came with a price as they burned a hole right thru the side of the brand new Vance and Hines head as the bike leaned out.

The team got back swapped motors and made it just in time for the second qualifier. Trying to push a little harder they spun and shut off. After discussion, the team decided to sit out the last round knowing they had a good combo for Sunday and no more spares in the trailer.

First-round on Sunday the bike wheelied almost instantly, but Frankie was able to catch it and ride it out to a 6.74 @ 204mph. Knowing the bike wheelied, they turned it down in first gear to eliminate the wheelie for the second round, but it wasn’t enough. The bike wheelied again almost instantly. Frankie did another miraculous save and rode it out to another win light. But during the end of the pass, the motor dropped 30 lbs of oil pressure. They went back and did all the normal tests to see if the motor was hurt, but there were no signs of it being hurt.

Fearing the oil pressure issue would destroy another bullet, the team decided not to run it full out. Frankie did his burnout and staged differently trying to get their opponent Rodney Williford to mess up on the starting line, but no such luck, Williford is a multi-time Champion for a reason. The Stotz Racing team ended the race with that great milestone of a 6.50 to add to their long line of accomplishments. The team now heads back to Chicago to tear the motors apart and be ready for the next race in 2 weeks at US41 for NHDRO in Morrocco, IN.
error: Content is protected !!