BST Carbon Fibre Wheels are the lightest, most advanced in the world, tested to the toughest standards

• BST uses Aerospace FAR25 qualified materials as used by NASA and Formula 1
• BST Carbon Fibre Wheels are the only ones to conform 100% with the JWL safety standards
• BST is the only OEM-certified Road and Race wheel meeting OEM standards which demand that we meet JWL impact standards
• BST Carbon Fibre Wheels are lighter than any others
• BST offers the widest range of wheels with more than 200 different fitments and 9 unique styles to choose from
• BST 12 years of ISO 9001:2015 certified by TÜV Rheinland
• BST R&D constantly improves our methods, processes and products
• BST have shipped more than 30,000 wheels since its inception
• BST have tested more than 300 wheels to the highest international standards

Our ISO9001:2015 is annually audited by TÜV Rheinland. This German management certification endorses all BST’s systems and processes that enable the production of products in volume at the required BST quality.

TÜVRheinland standards are considered to be the best in Europe. BST has been working with them for 12 years and our carbon fiber wheels are the only wheels that have consistently passed all their tests.

BST fully complies with DOT E, which is an internationally recognised standard that certifies that the manufacturer complies with all Motor Vehicle Safety Standards according to the Department of Transport.

BST is the first carbon fibre wheel manufacturer in the world to earn OEM certification. Our published tests and loads on motorcycle wheels have been confirmed by Ducati for OEM purposes.

Since its inception, the name 'BST' has always been synonymous with technological carbon fibre innovation throughout its history. With a thorough understanding of material characteristics combined with aeronautical engineering, process optimisation and automation, we are constantly evolving and staying ahead of the curve. As a high-tech engineering company we specialise in the design, engineering and manufacture of the best carbon fibre wheels and structural components in the world.
BST manufactures a vast range of carbon fibre wheels in our 50 000 square foot facility in South Africa, which is ISO9001:2015 certified. All our processes for production, part numbering, quality control and shipping are documented and stored with each product having its own unique serial number for full traceability of every component. Our wheels are uniquely homologated for track and road use by the certification institutes of Germany (TÜV), compliance with the United States of America (DOT E) and Japanese JWL.

Because we can engineer with carbon fibre and maximise on its properties of high strength and low weight, we have reduced the weight in the spokes and rim without compromising strength. The weight is therefore concentrated in the hub, which means that rotational inertia is reduced, making the bike easier to handle, and allowing you to accelerate quicker and brake later. So not only is the wheel lighter, but it is engineered for maximum performance.

Stringent Testing For Your Safety

There are several critical tests which all wheels have to pass. BST has chosen to test to the most stringent standards for all the tests, including Torsional, Cornering and Rotational and most especially the IMPACT test. BST chooses to meet the JWL standards which are the highest in the world, and are required by all OEM manufacturers. The true and correct interpretation of the JWL impact test is to subject the Front Wheel to a weight 2.5 times the published static load rating. The BST Rapid TEK static load rating is 155kg, so the impact that it must withstand – and DOES withstand – is 387.5kg.

No other carbon fibre wheel equals this:

BST Carbon Fibre Wheels are 100% carbon and can shave between 40 to 60% off the weight of a normal alloy wheel. The carbon fibre is imported from Germany and the temperature is controlled for the trip. It is stored at a constant -20˚C to maintain the integrity of the material. The carbon fibre we use is a combination of woven and unidirectional formats, and is impregnated with a resin matrix made from toughened epoxy, specific to BST requirements. Each wheel is made from around 130-180 carbon components which are cut on Zund automated machines. All BST wheels have the highest quality material and exhibit a very distinctive look in the cosmetic pattern. A qualified automotive paint with UV protection finishes off the hand crafted work of art. The BST pursuit of perfection

By performing in-house testing BST Engineering fully understands each product and material’s capabilities and constraints, allowing us to optimise them to remain at the forefront of technological innovation. The most stringent tests from each standard are performed, along with any other notable strength tests. For wheel testing, we have three tests that are carried out on our in-house equipment, namely impact and rotational bending fatigue testing and torsional fatigue testing. Only once the testing team is satisfied with the properties and strength of the product will it be approved for production. Innovation in every detail

BST final machining of the carbon wheels is done on its own hub, ensuring that it runs true within GP standards and tolerances. We manufacture all our own moulds and tooling, we also manufacture most of the components that go into the production of the wheels. These include the hubs, fasteners, spacers, sleeves, seals, components for air valves, sprockets and sprocket carriers. Our cutting-edge machinery and in-house anodising plant gives us the precision these products demand. We also manufacture numerous structural components for cars and motorcycles, including fuel tanks, swingarms, tank covers, frames, sub-frames, fenders and fairings, as well as customised, hand crafted carbon components. 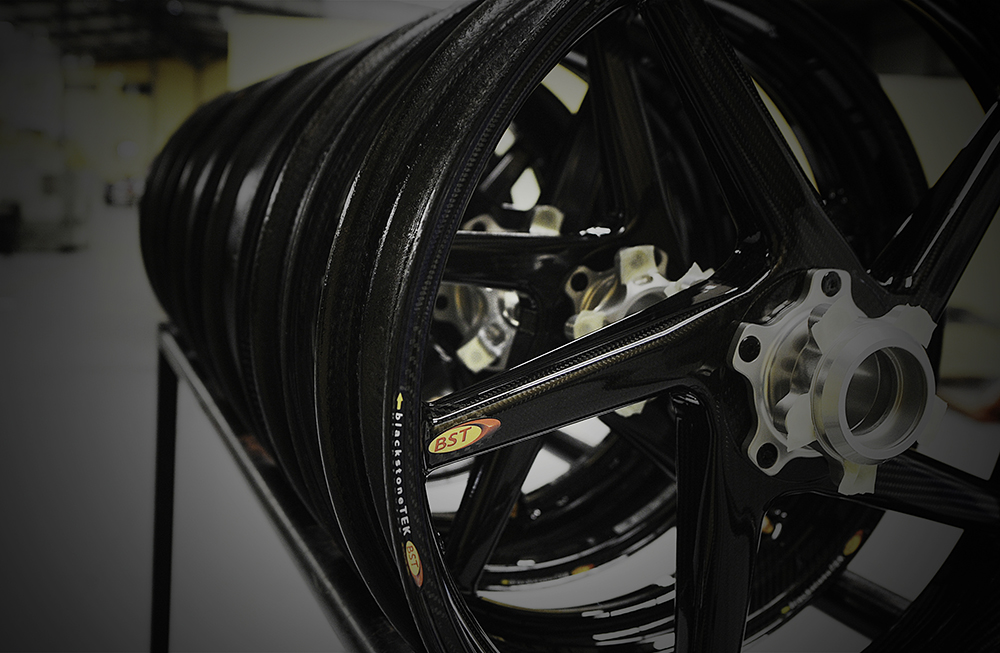 In the process of engineering each BST product, every single aspect has been carefully considered, improved and radically evolved. Every step of the manufacturing process is logged and the entire history of each component is stored with its unique serial number. The look and appearance of carbon fibre is critical – and difficult as one is working with a fabric – and BST uses the lines and weave to create a masterpiece of hand-craftsmanship. We pride ourselves in delivering exceptional products worldwide, continuously advancing innovation to ensure quality, reliability and durability of our already highly-regarded wheels and structural components.

The Cornering – Bending Fatigue test rig simulates the loads experienced by a wheel during cornering. The wheel, held stationary, has a load arm attached via the normal mounting points of the wheel. The load arm has a dynamic force applied to the free end acting perpendicularly to, and rotating around, the centreline of the load arm. This force is applied by rotating an eccentric mass around the centreline of the wheel. The weight of the eccentric mass, the distance of the mass from the centreline as well as the speed at which it is rotating all contribute to the load applied to the wheel.